'cultivate respect and humanity will grow' - the only banner in this photo. I did not see it when I took the photo.

On Saturday the 21st of January 2017 I left a meeting in Riverside to catch what I could, of the Women's March in Cardiff. I got there late. I had planned to go after my meeting, and had deliberately only taken a 50mm lens, as I wanted to be able to isolate individuals with small depth of field. A 50mm lens makes you work, move your feet, get amongst it, close up, feel part of (you can not zoom in from a distance). Many of my social documentary shoots are like this, it makes the results less anonymous, less photojournalistic, more a part of that community.

I made my way around the back of the speakers until I was at their immediate left, facing the audience. Not a great spot for speaker portraits, but that wasn't what I was after; though I did catch a couple of close ups, hand held on live view at arms length to create access. Luckily some mid-afternoon low winter sun was still entering in from the South West. I was scanning the crowd, I noted an illuminated face, she must have been catching reflected light as she had her back to the sun; the only lit up face; NB I did nothing to accentuate that light in post editing. Around her were other depths of expressions, reflections, private thoughts, all in contrast as the sun was behind, I made her my isolated point of focus, centre frame.

Later at home I saw this photograph as the one that I set out to achieve, the one that best summarised the sentiment of the event ‘for me’, respect, humanity, unity; yet even though we stand together at a time and place with shared purpose, it is our presence, our motivation as an individual, our unspoken words, thoughts, our commonality of purpose. An individual creates and unites a crowd. Only later did I noticed the only banner in shot, 'cultivate respect and humanity will grow’.

Afterwards I walked to the Trinity Centre for the post march get-together. A cross cultural, cross age, cross gender, inclusive community 'get together'. A real remedy to the emerging dominant zeitgeist. Left right, dark light, polarised in opposition. These events should remind us that we create the 'counter zeitgeist'. Xenophobia, sexism and inequality does not cultivate respect or grow humanity, it only casts a dark shadow of fear, intolerance and abuse. Now and historically there is a 'moral high ground' to re-cultivate. Which zeitgeist do we really wish to emerge as the prevailing narrative of our time; remind yourself that counter movements need your presence, actions and voice to be able to prevail for the well being of all. We are all an individual, but as part of a crowd we can really make the difference. 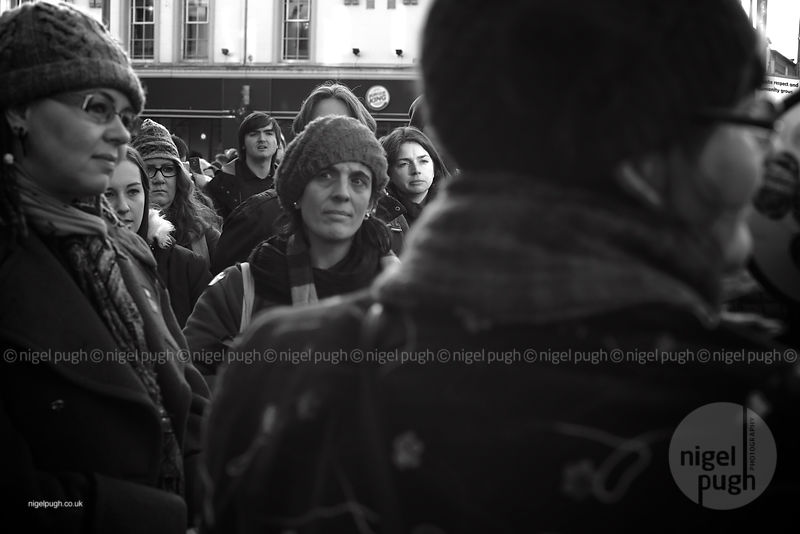